Many practice QSOs were made across the room, some using sidetone oscillators but also radio-to-radio QSOs by connecting dummy loads to the antenna sockets.  Pick a band, any band…

We had a 30m station set up for ‘live’ CW contacts and, although the antenna was a simple dipole folded around the ceiling, it tuned up and had got some RBN spots in Spain and Germany the day before.  Unfortunately the band conditions were awful during the morning and we were also suffering from S6-7 of noise so it wasn’t until later in the afternoon that G0POT ‘broke the duck’ with a QRS contact with EA7JUK.  Of course, everyone else in the room was working to copy both sides of the QSO. 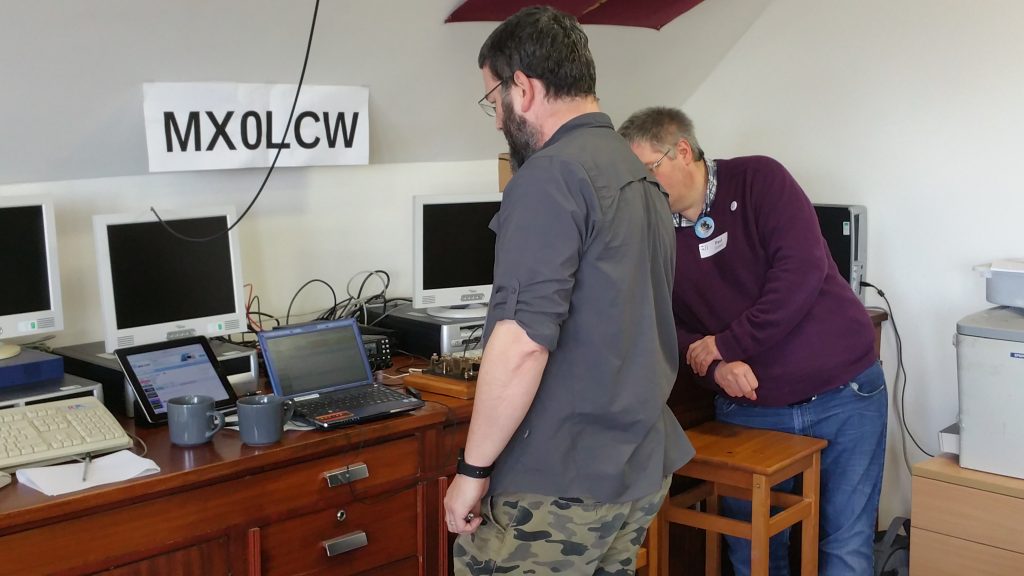 Thank you and well done to all the LIDS who attended.  We would love to be able to do another boot camp and hopefully in a different location so that they can be accessible to those for whom Bristol was a little too far to travel.

EDIT: This was originally posted on 1st April. It is actually not true but it is left here in the hope that it still raises a smile.

LIDS continues to grow and thrive and we have been delighted to see so many people interested in being part of us as they take their first tentative steps in Morse code or are here to help mentor those that are. The LIDS admins have been thinking long and hard about where we go next; about our purpose and the goals we would like the club to attain and we have come up with some very ambitious plans for 2016 and beyond.

One of those plans is to build a club station. We’ve had M0LCW as a club callsign for a while now but it rarely gets aired. Alex G7KSE has generously offered to host a new club station at his home QTH and the plan is to convert a spare bedroom into a dedicated club room equipped with a full suite of HF/VHF/UHF radios. Planning permission is already under way for a 30m tower, and the club will be open to all members for RSGB HF, VHF and UHF contesting as well as regular weekly LIDS nets or just a QRS rag-chew.

We have also been contacted frequently by LIDS members disappointed by the lack of QRS CW opportunities with stations from outside the EU. DXpeditions to exotic locations are all well and good but it can be very frustrating if you can’t get through the pile-up at 10wpm. Therefore we have plans to undertake a QRS-only DXpedition to the Caribbean region (or possibly the Maldives) and Michael G0POT has very kindly agreed to lead this activity.

You will appreciate that none of this comes cheaply and therefore the admin team has decided that it is time to introduce a membership fee. This is not a decision that has been taken lightly but we hope that all our members will agree that this is the best way to resource the club for a bright future.

The membership fee has been set at £20/year. There is no reduced rate for OAP/retired because 95% of radio hams would qualify and it would just cut our income, so £20 is the reduced rate. All members will shortly be emailed with details of how to make payment via PayPal or bank transfer.

The admin team would like to thank all LIDS for their continued support and we look forward to sharing details of the club station build and DXpeditions plans, as well as some of our other exciting developments for 2016.

LIDS is delighted to announce the date of our first Morse code ‘boot camp’ as Saturday 16th April to be held at the Memorial Hall, Gloucester Road, Bristol BS7 8NY.

A boot camp is ideal for those who have started learning Morse code but would benefit from a whole day immersed in CW to help them improve.  The day will start at 10am and there will be a mixed programme of concentrated practice to boost copy speeds, sending techniques using straight keys and paddles, and even live QSOs!!  There will also be lots of tea breaks along the way to help unscramble our brains.  We will aim to finish at 4pm but it will really be when everyone has had enough.

There is no charge for the boot camp itself but attendees will need to make their own transport arrangements.  There’s no private parking at the venue but there is free parking in the side streets.  If travelling by train then it’s a 25 min taxi ride from either Bristol Temple Meads or Bristol Parkway.  Refreshments will be available throughout the day, and you can either bring a packed lunch or there are cafes and supermarkets within a few minutes walk from the venue.  There is also a pub just over the road…

We’ll have an HF station set-up on the day to give the MX0LCW club callsign an airing with our new-found skills and there will also be talk-in on 2m FM.

If you would like to attend then please email g7agi@lidscw.org with your name, callsign, email and mobile number. It would also help if you could let us know your current standard (be honest!) and your expectations from the day.  There are 12 places available and these will be allocated on a first-come-first-served basis, with places reserved for those that completed the Doodle survey.  Further updates and joining instructions will be sent out to participants via email.

Sadly we couldn’t find a perfect date to accommodate everyone but if this one is a success then there will certainly be more planned for the future and we will try to move the venue around the country too.

CW Pong is a Morse challenge for two operators and has been developed by LIDS members as an aid to learning Morse code and improving on-air CW copy, as well as being a bit of fun.

Full details and rules can be found on our CW Pong page. Who will you challenge to a CW Pong duel?? Tweet your experiences to @lids_cw with the hashtag #cwpong.

An added benefit of our new lidscw.org web site is that we are now able to offer callsign@lidscw.org forwarding email addresses as a free service to LIDS members.

If you would like a LIDS email address, DM @lids_cw with your forwarding email address and we will get that set up for you.

Welcome to the new home of LIDS on the World Wide Web! Yes it looks a bit like the old site because we quite liked that one but we’ve made some significant changes too.

Thanks to Alex G7KSE who did the WordPress configuration and the content migration ‘heavy lifting’, and to David G7AGI for sorting out the hosting. Now we need to work on getting some fresh content on here. If you’d like to write an article page that you think would be of interest to LIDS then please get in touch by dropping a Twitter DM to @lids_cw or emailing stories@lidscw.org.

It’s only a few weeks until National Hamfest at Newark Showground, the UK’s biggest amateur radio rally, and LIDS will be there! Not on a stand – at least not this year, we’re too cheap for that – but LIDS members will be wandering around inside and outside the main hall and operating the LIDS club station from the camping area, using the club callsign M0LCW/P. And that has given us a great idea for a competition…

LIDS is all about encouraging people to have a go at CW for the first time, and we know plenty of LIDS members who are taking their first steps at learning the code but not yet plucked up the courage to try a QSO. Well, here is your chance.

Every LIDS member who has a CW QSO with M0LCW/P over the Hamfest weekend will be put into a draw to win a lovely LIDS mug. One QSO counts for each day of operation (Thursday/Friday/Saturday), so you can have 3 chances to win. But every LIDS member who works us will receive a LIDS lapel badge, so you simply can’t lose!

M0LCW/P will be operational on 40m at irregular intervals over the weekend. Watch our Twitter feed for details of when we are QRV.

There is no minimum speed for contacting M0LCW/P. Just call at whatever speed you are comfortable with. If you prefer, send a DM to the LIDS Twitter account with your QRG and M0LCW/P will call you instead. Don’t worry if you’re still struggling to make the characters work for you because all we need is your callsign in the log to be eligible. Have a look at our guide to your first CW QSO if you need a little extra encouragement.

This is a great opportunity to have your first Morse contact as well as get the coveted(!) LIDS club call in your log. And if that wasn’t enough, you get a LIDS lapel badge and a chance to win a LIDS mug!! If that doesn’t persuade you to blow the dust off that Morse key then we really don’t know what will.

LIDS is all about trying new things and learning from each other, and there’s a great community on Twitter who are prepared to share their knowledge. We would like to add a page to our site with hints and tips on learning Morse Code, written by our members, to share their experiences with those who are still learning or only just considering it.

So why not put pen to paper (does anyone do that any more?) and let us know your Morse story. What advice would you give to someone just starting out? Which methods worked for you, and which didn’t? Any pitfalls to avoid? Best ways to practise? Software you’d recommend?

We will publish all submissions in their entirety and won’t be editing them at all. We are not trying to write the ‘definitive’ guide to learning Morse – there are plenty of those out there already. These are your stories and your experiences, and what works for one person may not work for another. So we will publish them all, even if they contradict. You don’t need to be an experienced CW op to send us your story either; we want everyone’s views.

Please email your submission to stories@lidscw.org. There’s no closing date because we are happy to keep adding and adding to this font of knowledge (and that includes editing something you’ve already sent in if you subsequently want to change it).

Our Christmas competition closed at midnight and the winner is (drum roll please) …. Michael G0POT.

The competition got off to a slow start and it was anyone’s to take for a long while, but Michael pulled ahead in the last couple of days to finish with 4 LIDS QSOs and wins the prize of a 600MHz frequency counter. Well done Michael, and thank you to Patrick M0ZPK for generously donating the prize!

Our thinking caps are now on for our next LIDS activity. If you’ve got ideas we would love to hear them. Comments on Twitter to @lids_cw please.

In response to demand from our members, and now that we have passed the threshold of members required, we are delighted to announce that LIDS is now listed as a club on ClubLog. Go to your Settings page in ClubLog, click on the Clubs button and in the list of clubs underneath ‘Join more clubs’ you will find us listed as “LIDS CW & Data Club”. Let’s start getting those logs uploaded!