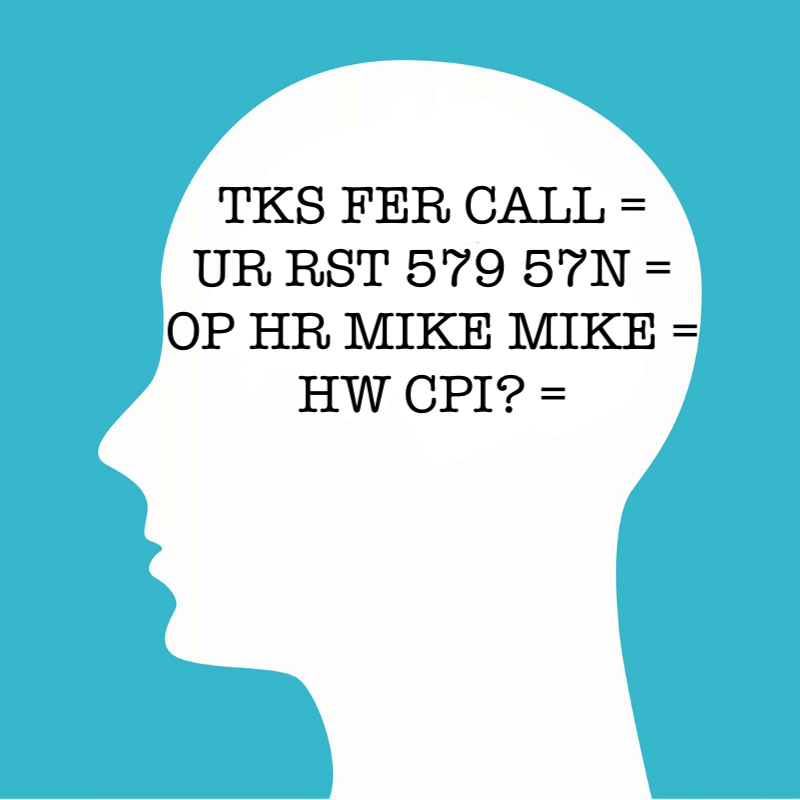 As you climb past 20wpm the ability to write down everything you hear diminishes (unless you are a good typist or can do short hand!). Most of us have to switch to head reading and only making occasional notes.

But how do you copy CW in your head without writing it down?

People often talk about having a mental ticker tape…in truth, for me it’s like seeing a word appear under a spot light on a little stage…once I see/hear the whole word it gets moved off to the left and starts to fall into the shadows. After a couple of words I probably couldn’t tell you the exact things I just heard but I understand the path of the conversation.

I guess I’m using a hybrid of the ticker tape (stage & spotlight) visualisation and predictive text, hearing whole words where I’m proficient enough and spelling the words out where I’m not. Most sentences have a little ‘padding’ even in CW e.g. UR RST IS where just RST would do so it’s not normally vital to get every word. Although I’m visualising the letters on my mental ticker tape I’m mentally sounding out the phonemes of those letters until I either ‘see’ or ‘hear’ the word. So if I copy INDIA I don’t think of the name of the letter like EYE-EN-DEE-EYE-AY…I think of the sounds each letter makes and this normally lets me ‘hear’ the word in my mind.

When you first learn CW you’re taught the importance of not anticipating what is coming next as this can lead to mistakes but, I confess, with head reading I use context and common words to start imagining what word might be coming next (I’m a bad, bad, boy and you’ll see below that this approach can cause you to miss chunks of a word). This is just like predictive text on your mobile phone. So, if I hear a J I might start thinking of common J words like JUST, JUDGE, JANUARY…typically the context and any words before it result in >80% accuracy. So if I hear “I JU” I’ve shortened the list to JUST and JUDGE. If, on the other hand I hear “I HAVE A JU” I’m starting to think of JUMPER or JUICY. This predicting isn’t always correct so I need to keep listening to what is sent or, if I’m not concentrating 100%, to discard the missed word. The more letters I copy at the start of the word the more likely I am to be correct.

We know humans only hold 5 +/- 2 things in their short term memory buffer so for longer words I either chunk them up or ignore the middle and just use the start and end of the word to identify it. So if someone sends INCREDIBLE I might hear the INC and start my predictive list (INCLUDE, INCITE, INCAPABLE…) but I will now forget about those three individual letters and just store INC as a sound. In this case as soon as I have copied INCRED (the sound blocks INC and RED) I probably stop listening knowing this is likely INCREDIBLE/INCREDULOUS and I can just grab the last one or two characters to confirm or let context guide me. Why stop listening you ask…why not listen intently to the whole word? I can do other things in that second or two like start to look up the other station on QRZ, or fill in my log book or simply think about things I would like to say…it can also give me a little mental break.

Similarly with longer words I frequently just get the start and finish. For instance if someone was mad enough to send ENCYCLOPAEDIA, I’ll probably get as far as ENCY before losing the feel of the word. It’s probably down to me trying to think about the sound that these letters would make together that grabs my focus so I miss a few letters. When my focus returns I may get as little as DIA at the end of the word but with the mental ‘sound’ of ENCY and knowing the word ends with DIA I’d guess encyclopaedia and be unlucky if this wasn’t right.

You can often tell if someone is going to send something unusual or important and there’s nothing wrong in writing that down if it’s important to you. As soon as I hear UR RST or OP HR or MY QTH sent, I pick up the pencil because I want to record the report or the Ops name or location. Similarly, if someone sends IVE JUST BOUGHT A I’m ready to note the object of the conversation because it’s going to be the one important word in the sentence and when it’s my turn to send, a little reminder of the key subjects is helpful. Head reading does not exclude jotting down notes for me.

By chunking up characters and ‘hearing’ phonetic sounds I can overcome some of the short term memory limitations. But what about the overall meaning of the ‘Over’…how do you make sense of a sentence?

That 5 +/- 2 things memory buffer is pretty accurate for random data but with context and meaning we can retain much more. Just like when we have spoken conversations you can discard the ‘filler words’…all you really need are the subject (nouns) and verbs to follow the meaning of a conversation so if your ‘ticker tape’ has a limited length, just hold on to the key words. I can rarely quote, verbatim, what I have just heard but I can relay the sentiment and that’s all you need to have a conversation.

An interesting tool to play with to pull out the important stuff (without having to remember too much) is Seiuchy.

Alternatively, check out Morse Code Ninja for lots of practice material to build up your head reading skills.

Kurt has created MP3 files, YouTube videos and Podcast feeds for a whole range of practice audio files including things like the top 100 words and Q-codes which are invaluable for practicing head copy.

If you have a pencil in your hand there is a tendency to get carried away writing everything but, while learning to move from writing everything to head copy, simply write (without looking at the paper) while you visualise what you're hearing and, as soon as you are comfortable what the word is stop writing and don’t bother reading it. If you find you have a word that you are struggling to ‘visualise’ then write out all the received characters in full and glance down to see what it was. This is a great transition approach to build confidence in head copy.

Do you head copy? I’m guessing even if you answer ‘No’ that you can recognise some common words like CQ and 73s without listening to the individual characters. If you’re already head reading, what is your approach and do you have any tips for people just starting to learn the skill?

HNY and best of luck on your learning journey...