Twitter hasn’t been very nice lately; apart from the constant spamming of adverts all over the place, they have now also severely restricted the ability of bots and scripts to make automated posts, which broke the lidspotter. The program was still happily running, it just couldn’t post. A temporary fix was made (using a very shoddily coded web page), but the bandwidth of a £1.20 per month virtual server isn’t huge. 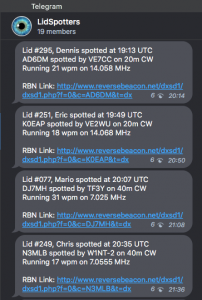 Enter Telegram. A free, secure messaging app that’s cross platform. I’ve been using it to communicate within a gaming clan for quite some time, and one of the channels we use is run as a news feed, which seemed ideal. So I got some setup details from the chap that made it, and created a LidSpotter version which runs smoothly and faster than twitter’s ever did (and we’ve discovered the alerts can even be made to appear on smart watches, too!). This feed can be found at t.me/LidSpotters

And now, Mastodon as well. I’d heard of it, but never really looked until Simon G0FCU mentioned it on twitter; so I had a chat with the admin of the mastodon.radio instance 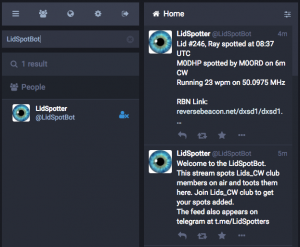 and got permission to play – and, on the first attempt, it works! Just create a free account, and search for @LidSpotBot then follow it.

I’m sure there will be some snags along the way, Mastodon is a new open-source network and is still evolving, but it looks good.

Hope to see more members on there. 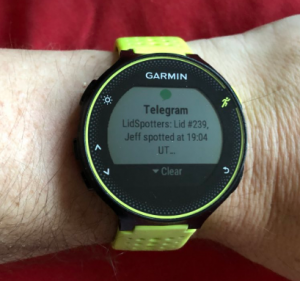